Its Doctrinal Arsenal Is Enormously Strengthened

Prof. Plinio Corrêa de Oliveira's latest book, Nobility and Analogous Traditional Elites in the Allocutions of Pius XII, has been launched in yet another country: . 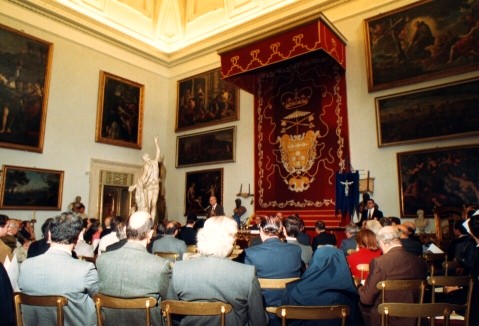 Never has the country stood in more need of such a work. Published by Marzorati Editore of Milan—firm famous for high-quality historical and cultural works—the book's Italian edition appears, coincidentally, or better, providentially, right as the country traverses a deep political crisis termed "Tangentopoli" ("Kickback City") by those striving to remove a ruling class widely besmirched by corruption scandals.

Inasmuch as corruption is the root cause of the Italian crisis, one cannot but conclude that this is more than a political crisis; it is a moral crisis. But what is more discouraging and worrisome, many analysts argue, is that no alternative, credible ruling class is available to reverse the trend to­ward self-disintegration and lead the Italian people toward the goals of a sound common good.

In this context one can readily appreciate the immense value of Professor Corrêa de Oliveira's work. It offers a solution for the crisis by explaining the meritorious role of the nobility in leading and shaping society through the centuries. Unlike less privileged countries, can still count on a numerous and experienced nobility, which needs only to rediscover its mission and function.

Millions of worried Italians may have therefore sighed with relief on October 31 when RAI 1 ('s most important TV network) provided prime-time coverage of the launching of Professor Corrêa de Oliveira's book in .

The launching had been held the day before at an international conference where leading members of the Italian aristocracy officially announced their candidacy for participation in the national leadership. Is it possible that Italians glimpsed a dim light at the end of their dark tunnel and recognized the alternative class able to overcome "Tangentopoli"?

"We will be the new Italian ruling class," stated Prince Sforza Ruspoli, one of the speakers at the symposium jointly sponsored by Rome's Centro Culturale Lepanto and Tradition, Family, Property—Italy Bureau under the patronage of Cardinals Alfons Stickler and Silvio Oddi.

About 250 distinguished guests attended the conference in the grand "Sala del Baldachino" of the magnificent , perhaps the most representative member of the Roman aristocracy. Among those present were ranking clergymen, scholars, diplomats and journalists, but, as one would expect, most of the audience were nobles, including Archduke Martin von Habsburg of Austria, Prince Carlos of Bourbon-Two Sicilies, Duke of Calabria, Princess Urraca of Bourbon-Two Sicilies, Marquis Aldo Pezzana Capranica del Grillo, Duke Giovan Pietro Caffarelli (President of the Associa­tion of Italian Nobility), Princes Carlo and Fabrizio Mas­simo, Baron Roberto Selvaggi, Countess Elena Caccia Dominioni and Marquis Luigi Coda Nunziante.

The renewed commitment of the nobility was fruit of Professor Corrêa de Oliveira's book, recently published in English, Italian, French, Spanish and Portuguese.

The launching of the English-language edition took place in , on September 28, before an audience of many hundreds under the chairmanship of the Honorable Morton Blackwell (see September-October issue of Tradition, Family and Property magazine).

The event was followed by presentations of the book in . The first presentation was part of the congress of the Paris-based CILANE, attended by the Grand Master of the Order of , Fra' Andrew Bertie. CILANE (Commission d'Information et de Liai­son des Associations Nobles d'Europe) is the umbrella organization of the associations safeguarding the principles and traditions of the European nobility.

On both occasions the book was received with enormous interest and appreciation.

Similar enthusiasm was shown at a November presenta­tion in honored by the participation of several of the most prominent members of the Sicilian nobility.

But at the symposium the Italian nobility unequivocally claimed its role in national leadership for the first time since the downfall of the monarchy. So much so that a full-page report in ' s largest newspaper, La Repubblica (), described the event as a "veritable cavalry charge, a counterattack." (Unprecedented numbers of nobles most certainly took part, either as candidates or as supporters, in 's municipal elections on December 5. Their names are laden with history and tradition and need no comment: Barberini, Orsini, Chigi, Borghese and others.)

According to Pius XII's teachings, the nobility has a fundamental role to play in contem­porary society. When the ruling elites of so many countries are suffering a serious credibility crisis, the nobility must strive more than ever to fulfill this role by leading an exemplary life and serving the common good in the most selfless manner. In this way they will be a model for the rest of society.

Clearly echoing the Pope's message as set out in the book, in his words at the Rome launching Prince Sforza Ruspoli called on all the members of the aristocracy to overcome their divisions and unite under the Papal leadership in the name of the people, who "want to see the values of prayer, action, and sacrifice, of which our ancestors—saints, leaders and heroes— gave testimony at the price of their life." Furthermore, Prince Ruspoli said, "I wish to express to Professor Plinio how grateful and indebted we are as ' s aristocracy, and therefore as an aristocracy faithful to the Church, for his work."

In his speech Giovanni Cantoni, head of the Alleanza Cattolica, stated that since Papal social teachings are part of the Church's moral Magisterium according to John Paul II, Professor Corrêa de Oliveira's brilliant commentaries on Pius XII's allocutions to the Roman Nobility should be regarded as integral to the moral theology of the Church.

In his turn, the renowned political analyst Prof. Domenico Fisichella stressed the historical role of the nobility and other traditional elites as moderating elements for an ideal relationship between the monarch and the people. He also demonstrated how contemporary elites, unable to perpetuate this function, easily become oligarchies.

Prof. Roberto de Mattei, President of the Centro Culturale Lepanto, highlighted in his speech that the nobility has a public vocation. It is called to defend "the principles and institutions of the Church and Christian civilization" at a political and cultural level.

Far from having lost their reason for being, the nobility and analogous traditional elites can give us hope for the future. Yes, the world is sinking into chaos and anarchy. But for those who wish, there are solutions—noble solutions—to our problems, as Professor Corrêa de Oliveira so masterfully outlines in his landmark work, whose presentation is scheduled for early January. q