"Madonna" Is Rebuffed in

—As part of a 40-day tour of ten countries, the singer "Madonna" ar­rived in on October 28.

The Argentine TFP protested the presence of "Madonna" by issuing a denunciation of this media darling and handing out thousands of flyers in the main areas of the capital. In the flyer the TFP urged Catholics to request the outlawing of the obscene "Ma­donna" show and to express their disapproval to its sponsors.

According to the daily media, the "Madonna" choreography included topless dancers and simulations of sadomasochism and homosexuality.

Although she calls herself a Catholic, Louise Veronica Ciccone, "Madonna," has more than once defined Catholicism as "a hypocritical and mean religion." On some of her music videos she makes sacrilegious use of statues and crucifixes. Her pseudonym clearly alludes to the name with which the Most Holy Virgin is designated in the Italian language.

Her degrading presentations — termed "daring" and therefore "courageous and marvelous" by elements of the media — provoked repulse in several countries on her itinerary.

In , the Centro Civico de Solidariedad, representing 47 civic, business and educational groups, asked their government to forbid the show.

Understandably, there was widespread disapproval among the Argentine clergy and laity at the arrival of "Madonna." 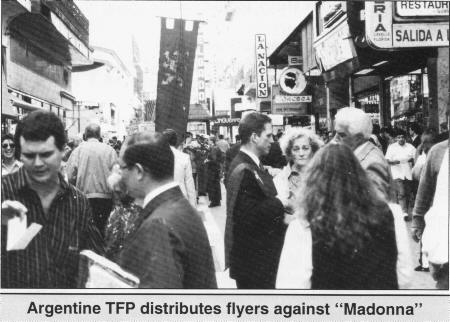 Cardinal Antonio Quarracino termed "Madonna" "pornographic and blasphemous" and her presence and per­formance "offensive to the Argentine woman." Msgr. Alfredo Nolasco, secretary of the Bishops Conference, declared that "`Madonna' attacks the dearest values of the Catholic Religion" and lamented that "many members of society choose not to voice their shame at her presence because they fear being labeled as authoritarian."

President Menem reproached the singer for her blasphemous use of the sacred symbols of our religion.

Attorneys Guillermo Piuma, German Amadeo Voss and Mariano Pinedo as well as Attorney General Dr. Alejandro Molina requested a court suspension of her show, since it attacked "the religious conscience" and harmed the psychological and social identity of the youth, a violation of the International Convention of the Rights of Children ratified by . However, Federal Judge Dr. Marcela Perez Caton refused the request, merely forbidding the attendance of unaccompanied children under thirteen.

As the Argentine TFP stated in one of its declarations, "a veritable wave of amorality, pornography and blasphemy is invading the country."

"These `artists' and `shows,'" it affirmed, "are an intolerable aggression to the deepest convictions of the Argentine people. They destroy the youth, good customs and public morality. They are elements of a profound cultural revolution taking place around the world."

"It is a sexual and anarchic revolution," the declaration continued. "Unlike previous revolutions, it does not aim to stir up the masses in order to attain its goals. Rather, it strives to change the mentality of each Argentine by accustoming him to the gross, the obscene and the blasphemous. In this way, it hopes to undermine the foundations of the social order."

The subsequently issued an appeal to all Catholics, reminding them that an inactive indignation is a form of complicity. It exhorted them to express publicly their love for the Most Holy Virgin and the Catholic Church and to demand efficacious government action against the show.

The street campaigns of the TFP could not be ignored by the media. The well-known TV entertainer Marcelo Tinelli criticized the TFP on his "Video-Match" program. He was tired of phone calls from people attacking his imprudent support of "Madonna." Her show organizers, Productores Internacionales de Rock & Pop, feeling the heat, stated in a communiqué that, as far as they were concerned, "the groups claiming to be the defenders of Catholicism in Argentina represent neither the Catholic population nor the youth, who wish to attend the show."

Meanwhile — and for the next three days — the switch­board of the TFP headquarters was swamped by well-wishers from around the country.